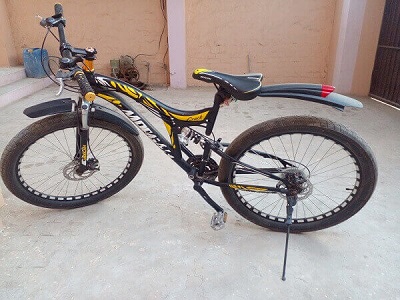 Posted in General Queries By Posted on

Making a mountain bike more road-friendly can be done with the right tires but sometimes what you think you need might be different than what you would need.

the short version of the answer is that

Yes, you can put road bike tires on a mountain bike but whether or not the rim will accept the new tire is something you have to look into which we will discuss later the other thing you could do is buy a set of a different wheelset which would work fine and you wouldn’t need any additional upgrades with those.

Of course, most people would want this setup (new tire on the same MTB rim if possible) rather than buying a new wheelset just for the road.

It’s important to keep in mind that I am talking about Tubeless-ready tires, not custom UST tubeless which I will explain later on but because most MTB wheels are Hookless (NON-UST) I am going over this first

And the specifications about the width of the tires are there so that the tires are at least acceptable by the rim as I mentioned MTB wheels are mostly hookless and the It’s necessary that they are equipped with the right width especially hookless tires because the bead needs to be as tensioned as it can and it shouldn’t stretch otherwise if the tire bead is loose it might blow out or cause other problems.

It’s also vital to understand that in this kind of setup you would not be able to use any tubes with this setup, hence the 72 psi pressure because you can achieve that 120 psi status with tubes only

This setup has, of course, the advantage of tubes because you would be able to fill up your tires really high but even on these setups usually, you can fill them with more amount of air overall the results would be the same due to the width of the tires.

The reason for that is that road wheels are really slick and on the existing MTB rims that you should be using tires will be wider and heavier.

Restrictions or disadvantages of using Road tires on MTB rims :

So these are all the drawbacks that will still come even as you put on tires that are more road-friendly.

Of course, on the plus side, these tires will not be as heavy as mtb tires are because usually, these tires would be single ply and there will be no knobs on them and they will roll faster compared to the Mtb tires as well

The biggest advantage though would be that these tires will not wear out as fast as normally Mtb tires would on the pavements or roads.

Would you need to make any adjustments to your bike :

Some people do think that the BB height of the bike will drop but that doesn’t matter if you are looking in the context of running these bikes on the road even in reality it wouldn’t drop so much that it would cause problems.

A summary of the whole thing is that everything will remain the same unless you want to make changes your self like locking out suspensions for a little bit more torque savings and running your bike at a higher speed.

Equipping your MTB with road wheels (Rims and tires) is possible as well and that setup will work as well previously as I was discussing more around setting up wheels on existing mtb rims in this case you would need to buy the whole new wheelset setup but in both cases, both will work fine

this setup will, of course, work better because the wheels will be much lighter and the tires will be alot slimmer as well which would give them better rolling resistance and better aerodynamics as well.

And you wouldn’t need any upgrades to the frame as well but there can be complications if the chainstays are far too apart from each other.

In most cases, these problems occur when the bike comes with really wide tires like with fat tires bikes but these can be countered with the help of the spacers to some extent course there are still limitations to as to what extent spacers can hold the tires firmly before they become untrue.

Other than that on normal bikes which usually come equipped with wheels that are 2.4 or 2.5″ inches wide there shouldn’t be any problem but just to be on the safe side make sure that you always double-check with your local mechanic.

The downside of equipping road bike tires on MTB :

The downside of equipping road bike tires on MTB is the hideous form it takes your bike will be recognizable from afar that you have done it to your bike and this is by far the only downside that you would encounter.

Other than that this setup is far more efficient than what I have described before.

If you are only after efficiency only then it shouldn’t matter but in the looks department, the bike will not look very appealing.

Both of these setups are most commonly and widely used by people and these are the most logical solutions to your problem as well but if you had like to make more adjustments to make your bike more efficient for roads then here are some articles that you can check out as well.