Spokes are the thin needle-shaped long threaders that combine with each other within the back and front wheels of a mountain bike and hold the weight of the bike and rider. they look thin needle-like stuff but the working and worth of these spikes are invisible and hidden as these are the most important part of every mountain bike wheel.

these are made of steel and aluminum metal and make a round network within the wheel and give support to the wheel to round better through the trails. these are thin and weak sometimes they break and bent on the trails by hitting the wheel or crashing. damaging of a single spoke does not affect your ride even it does not feel irritating while riding and rolling the wheel but if more than a single spoke have been broken or damaged then it starts shaking your bike and it would be difficult for you to control your bike on the trails like it starts creating a serious issue. the bike wheel starts bubbling and it distracts the bike from its on way.

In this article, I am going to cover everything related to the spokes:

Spoke of the wheel are inserted upward in the holes of the rim and downward these spokes are adjusted within the holes of the hub. notice the hub of your bike which contains many holes where the spokes are inserted and adjusted accurately in round shape even these are not flexible and shakeable and provide a better command to the wheels to run smoothly on the trails.

what are Spoke nipples and how do you benefit from them :

These are half an inch headers used to fit on the top head of the spoke within the rim hole to hold the spoke of the wheel in a fixed place and create tension within the spoke.it does not allow the spoke to become loose because it is fitted tightly with the required key.

in case, if your spoke has been broken, bent, and damaged and you are installing a new spoke then you can use the old nipple or header for adjusting the new spoke for the same place. the nipples of the spoke stay in spoke damaging because these are tiny spacers and firm in structure more than the spokes. 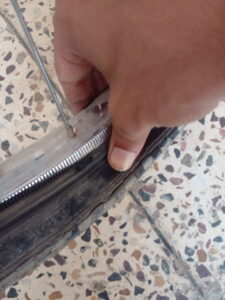 Spoke nipples are more important because the spoke is totally reliable on these nipples, if they become lose the spoke begins to lose and ejects outward from these nipples. so these are adjusted tightly by rotating and applying a torque force to stretch the spoke and make it firm to rotate the wheel properly.

How to connect the spoke within the hub of the wheel?

the ends of the spoke which are inserted within the hub holes are bent shaped making an angle of 90 degrees and the end is thick with more width than the small holes so that these spokes would not eject outward.

does Installation of the spoke requires lube :

Does the amount of spokes make any difference in the front and rear wheels? (answered) :

in circumstances, if a single spoke in the rear rim has been broken or bent then if the number of spokes is large it would not create any risk for you, you will be able to ride your bike on the trails and safely reach home. that’s why always install a high number of spokes in both the rims.

is it good to ride a bike too long with a broken spoke (the dangers) :

when a spoke breaks stop your bike and eject the broken spoke from the hub and if you have a small spoke key then uninstall the other half part of the spoke from the nipple and place the nipple in your pocket and bag it is helpful for the next new inserting spoke.

Does broken spoke affect the balance of the wheel :

Yes, all the spokes of the wheel are equally adjusted and equally lift the applying weight of your bike and your body weight and the stuff that is with you on the trails may be a gear bag, backpack, and the other necessary stuff. When a spoke breaks then the weight is distributed between the other spokes and the burden increases which is not good for the wheel, rim, and spokes.

the other major thing is that a single broken spoke creates shuffling in the tension of the other spokes and all the wheel starts shaking and bubbling, if you are too far from a mechanic or home then it would be better to run the bike at a low speed and safely reach home, after reaching install a new spoke of the same size, length, and material.

your bike even does not run normally and a broken spoke increases chances of falling and dropping from the bike that is why it’s necessary to run your bike at a slow speed and safely reach home.

the mountain bike trails are hard and tough which increases the chances of risk with a broken spoke, on the other hand, if you are a road biker then a broken spoke does not cause any risk and danger at any speed to run your bike on the smooth road.

Always buy accurate sized spoke when replacing the broken spoke because if the size and width are not the same then it would affect the other spokes and rims badly and it will cause you trouble replacing all of the spokes of the wheel from the rim.

How many spokes are good for a 29-wheel mountain bike :

the number of spokes for the large-sized 29 wheel should be 32 or more than 32. using less than 32 spokes in a 29-wheel mountain bike would be bad for the rim and the wheel.

the number of spokes should be 28 or 30 in number for the lower-sized 26 and 27.5 bikes. if you are using more than the 30 spokes then it’s pretty good for the wheels and the rim.

U-shaped spoke key and the screwdriver, two are the main tools used to replace the broken spoke from the rim of the bike although for the opening of the wheel, cassette, disc brakes, and the rotors you need Allen wrench, Hex key, and park tool.

These are the ten best mountain bike spokes used to install in the rims, if the old spoke had been broken or replaced.