Different wheel sizes on bikes are becoming common or you might think that they are but they have been common before as well Riders usually do this to top up one function of the bike like better rolling or more aerodynamic much like people mountain wider or narrower tires but this is completely different from that since we are talking mountain different tires for example mountain a 27.5 tire on the front on a bike that was set up to be run on 29″ wheels

this setup is less common and less used than the other setup like mounting a bigger tire in front and a smaller one on the rear and you might not even see it as much the reason for that is that it’s not quite common as the other setup and you might have seen it somewhere in the bike parks or if you travel than somewhere where there is some traffic on the trails.

To shorten the hassle and the quickest answer would be

You can use a smaller wheel in front and a bigger one on the rear (29″ in the rear and 27.5″ in front) on an XC bike only and on mild trails where you need more aerodynamics to roll your bike faster other than that you will break your wrists on any other bike or going downhill

and let me tell you everything except that you are riding very specific trails on a bike made for speed like an XC bike that excels on those kinds of trails and is made to be light to do that as well. 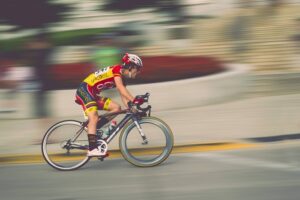 How mounting a smaller wheel upfront on an MTB would Act :

but on gravel trails If you fit an XC with a lower tire upfront, it might do you some good in only aerodynamics of course nothing more than that  and that could mean something for them

But on Enduro, trail, and DH bikes it will turn into a disaster

Disadvantages of mounting a Smaller wheel on the front:

These are some of the obvious things that you will have to either fix watch out for or might even need to change.

You won’t be able to travel far although the bike might be a little bit faster the extra constant weight on your hands and keeping an eye on trails will become tougher with the time passage, you will constantly have to bend your neck around to see the line and bend in and bend out that would also put a strain on your back as well

On the technical sections, you would need to make better line choices since your bottom brackets angle would also change and get lower as well so making the right depth calls would become crucial and you might need to think about where you are going more than you would normally do.

Adjustments you would need for this kind of SetUp :

Well we are through all the pros and cons and here is the adjustment that you would need to do, if you are you are in a pinch and you can’t find the right tires for your bike

Or you could get slightly raised handlebars so that you dont throw yourself off bars when braking suddenly and that can happen very rapidly on this kind of setup depending on how low you are going to set up the front tire.

Closest Setups that could work with the given wheel sizes :

These setups can work but you still have to be careful and make the bike as optimal for riding as you can as I have mentioned above you had like to close the gap as much as you can rather than forcing the wrong wheel combo because it would never turn out to be a good setup and making modifications to your bike just for a few rides will cost you alot.

if you are in a pinch I had to say wait it out or go for more optimal options like having a Bigger wheel in front and smaller in the rear that would work much more better than this kind of setup.

Possibilities dont always mean success if you have the money to spare and experiment with different things sure try it but I would advise against it since a better version of it is already available in form of mountain bigger tire on the front rather than the rear.