Carbon and aluminum frames are the most common types of frames used in bikes today and they are by far the best option comparing the weight and other factors like budget and durability but there are concerns in the general public for carbon frames, if they are good or not and if you have the budget should you consider buying one

Due to fair of unknown and higher prices, people usually misunderstand carbon bikes but here’s everything you need to know about carbon frames to cut to the chase

carbon frames are stronger as compared to aluminum frames. 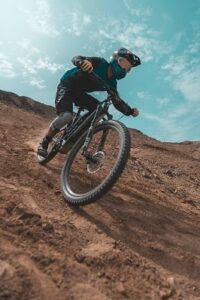 Carbon frames do not break after crashing 2 or 3 times since these are handmade products so there is a slight difference between the carbon and the aluminum.

Most importantly carbon frames break suddenly but the aluminum frame breaks a bit slowly this makes a big difference for riders who may feel dangerous having a carbon frame.

when a carbon frame causes any damage it stays hidden internally you will not be able to inspect it from outside you will think nothing happened but riding suddenly carbon frame it’s a big risk.

Carbon frames last from 0 to 100 years, they can last longer than your life span but everything needs care, they are in no way less reliable than aluminum frames. 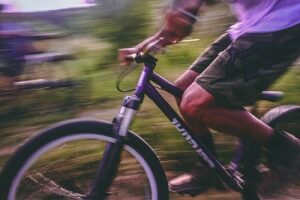 Carbon frames do not become old with bike age frame is hard it does not depend on how much you will go for a ride if you can care about it to prevent it from hitting crash.

After hitting the crashes the carbon frame will reduce its life span.

Beware of buying an old carbon frame bike because you don’t know the past of the carbon frame maybe it was scanned or it contains any fractures inside which will be junky for you.

Having a good carbon frame bike depends on the budget don’t buy a cheap carbon fiber frame maybe you will give a bad review and it will create a bad impact on the carbon frame’s reputation.

Carbon frames are not a new thing either they have got the spotlight in recent years, especially in mountain biking but they were used alot back in the days mostly for road bikes here are some famous names from the past these are all vintage carbon frames bikes that were quite popular back in the day

Chinese carbon frames are cheaper and may cause trouble for you and also costs a very much in its repairing from the shops so buy a firm thing just a single time rather than a cheaper thing.

Why aluminium is preferred over carbon frames?

Aluminum frames show where the fracture is present and alarms you not to go on a ride.

An aluminum frame has a lighter weight as compared to carbon frames.

Aluminum frames are preferred for high jumps on single trails.

The elastic modulus of aluminum is about 70Gpa, aluminum frames are stiffer because of the high diameter setup in the geometry.

aluminum is less flexible compared to steel and carbon frame. 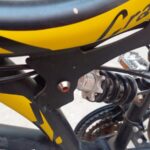 Going through single tracks your body weight is more important this is the reason the riders mostly prefer aluminum frames due to their lesser weight.

How to know if your bike frame is aluminum or carbon?

You can test the frame thickness, and use quality material without any negativity by tapping on it, it will make you think about the positivity of the frame.

The coin test is mostly used for checking the framed reality. you can tap the upper surface of the frame and listen to the noise the sound varies differently if the frame is scanned or fractured or repaired by the mechanic the sound will be dead. 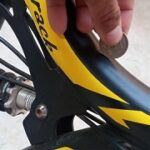 You can test the frame by scratching the sticker of the frame a little bit you can see whether it’s an aluminum frame or a carbon frame.

tapping a frame makes a sound of dead and hollow and will guide you about the layups of the frame.

The better understanding you will gain about the frame after riding it, you can check thoroughly.

Frames of both metals have different thicknesses of the tube which may give you different indications of which one should be good for you.

Can carbon frames be fixed?

Yes, carbon frames are fixed and repaired like it was before.

The welding option is good for the frame from the mechanic shop it increases somehow its lifespan. after the welding get a sheet of fabric or some firm sheet dip it in the glue and wrap it around the broken welding area.

You can fix the carbon frame temporarily it will not last long it means once the frame has broken you have to replace it with a new frame.

After repair from the mechanic shop maybe the carbon framework smoothly like it was before but it will not last more than a year or two it depending on the trail’s conditions, many chances worth the risk are present.

Coming below from the downhill your temporarily repaired carbon frame if broken will increase the risk of breaking any part of your body to avoid this buy a new frame.

Is a carbon frame lighter than aluminum?

There is a little bit of difference between both roundabouts 1-3Ibs of weight if both frames are of the same model.

When you shift from a carbon frame to an aluminum frame you may feel a little weight difference either it may be lighter or heavier. Both are designed for racing, uphills, downhill, and local trails.

Most riders do not spend money on going from carbon to aluminum and vice versa because a little bit of difference does not matters.

Which frame material is used for professional mountain bikes?

Are carbon frames the future of mountain bikes?

While carbon frames are not yet somewhat trusted by the people and there are concerns about them in the general public but still they are widely used and accepted, they are used among professionals as well so you can be sure of their reliability and their performance.