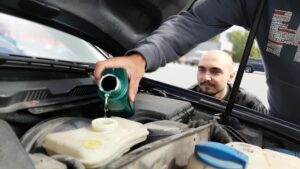 I am not the best in the subject but I did my research and here is what I came up with.

Generally speaking, since both the mountain bike brakes and car fluid are operating in the same manner lately(hydraulic brakes) but there is a difference in fluid or their properties but before that to answer your question.

Yes, car brake fluid can be used in mountain bikes, Specifically, SRAMs use DOT 5.1 braking fluid, and cars use Dot fluid as well, To be specific you can use DOT 4 and DOT 5.1 can be used, but DOT 3 has lower boiling and freezing points which won’t be ideal to use.

Dot 3 and 4 are compatible they are both hygroscopic and you can mix them they are okay to mix but not very recommended since the higher the dot number is the higher its boiling and freezing points are which essentially means that if you are mixing dot 3 and dot 4 the boiling and freezing points will exponentially drop down which may not be a very good thing since that beats the purpose of using the dot fluid in the first place.

in case you are wondering why the brake fluids have numbers like dot3,4,5, they represent boiling numbers dot 3 would have lower dot 4 would have a bit higher, and dot 5 would be much higher.

How to know which DOT fluid is used in your brakes :

The easiest and quickest way to go about it is to ask the manufacturer what kind of brake fluid your brakes use if they gave a manual or you can perform this check.

Why SRAM uses DOT fluid and not mineral oil :

SRAM uses DOT fluid because it has higher boiling and freezing point meaning there are fewer problems with the liquid freezing in winter or overheating in summer so it works well for all kinds of environments DOT fluid is also hygroscopic and that is ideal for rainy areas as well because the water just doesn’t mix with the brake fluids which makes it much more ideal to use.

Can you use mineral oil as braking fluid in SRAM breaks and vice versa:

No, the fundamental breaking system for mineral oil-based brakes and DOT fluid is very different and the density of the fluids is also different as well.

DOT fluids do not mix with mineral oil and it would mess up the braking system inside the brakes may either start bleeding or the efficiency will drop significantly so I would really recommend using other fluids for the brakes.

Is SRAM the only brand that uses dot fluid for its brakes :

Why Shimano doesn’t use DOT fluid as well :

DOT fluid can be expensive and mountain bikes are really venerable every now and then you may need to perform maintenance on them and you may need to bleed the braking fluid and mineral oils are much cheaper than the dot fluids.

Another reason would be that dot fluids can contain diethylene glycol which is not a very safe element and is very dangerous, mineral oil, on the other hand, are not toxic but there can be elements like ethylene glycol or other chemicals in them as well so both are not very safe but dot fluids are comparatively more dangerous to work with.

Because ethylene glycol which may be in the mineral oils has a substitute like propylene which is considerably safer.

But in any case either the mineral oil or the dot fluid I wouldn’t recommend even touching them or working with them without no safety gloves or something that can stop you from coming in contact with these substances.

Which is better in performance mineral oil or DOT fluid :

But overall performance vise dot fluids are much better they have higher density longer life span and better temperature handlings.

Yes, you can mix them but the boiling point will fall and both of these fluids are made for different purposes dot 4 is used in cars as well as mountain bikes but sometimes you can see even dot 5 fluid in the mountain bikes.

But yes you can mix dot 3 and dot 4 fluids together and it shouldn’t dry or bleed out if you are not using brakes for hours on end and using them in such a manner that you know yourself that the temperature would go way above and beyond other than that you will be just fine your braking pads may run out faster than the fluid.

No, you cannot mix Dot 4 and dot 5 dot 4 is made up of hygroscopic material and dot 5 is silicon-based brake fluid, in case you mix them your brakes will fail, what you can do is bleed out dot4/5 then use either one.

But still mixing them is not ideal if you had like to use dot 5 or it is the only thing available then you may as well use dot 5 or dot 4, but mixing them may result in brake failure, at this point you need to run the brakes dry of the braking fluid either one you were using and clean of the interiors and only then use dot 5.

I would as go far as asking you to try that fluid before you carry on with it.

Dot 5 is silicon-based brake fluid while Dot 5.1 is hygroscopic fluid both have different properties and cannot be mixed, mixing them could cause brake malfunction or failure.

Dot 5 and DoT 5.1 just don’t add up and yes Dot 5.1 has a higher boiling point but it’s a silicon-based fluid and dot 5.1 is a hygroscopic fluid if mixed together they sure to fail, you could use or mix Dot 4 and Dot 5.1 together since they are both silicon-based fluid but it’s not recommended since 5.1 is for larger vehicles you may encounter problems temp and viscosity wise since both of the properties of the fluid are different for each fluid.

What is a hygroscopic fluid:

What is a Silicon-based fluid :

Silicon-based fluids are basically oils that have higher density causing them to be the best fluid to be used as brake fluid, higher density means higher viscosity in simple words stickiness of fluid which in turn is more reliable than water because it doesn’t easily slip or disperse and give brakes a better chance to be used in the intended ways.