15 Best Full Suspension Mountain Bikes for Women worth looking over

A couple of days ago my elder sister asked about the full suspension mountain bikes she was riding a hardtail up until now but it was holding her back so I decided to look for some full-suspension bikes for her and in the process decided to write an article about it.

She used to ride my bike as well since we are almost the same height but men’s mountain bikes are a bit different than women, in women’s case the handlebars tend to be narrower, the inseam or standover height is a bit lower, and reach is also lesser than men, but still, it differs for everyone but still, I think a women-specific bike would be much more comfortable for her to ride.

I searched about the full suspension women mountain bikes and read all the basic info and narrowed down some key features to help you decide what you are looking for and what would make you the most comfortable.

here are the 15 best full-suspension mountain bikes for women that I came across that caught my eye.

I have mentioned all the specs below that you could see and decide what you want these are all budget-friendly bikes you could also check them out on different marketplaces,

Liv is a women-specific brand for mountain biking so they are best at making and considering women-specific geometry and making bikes, they make smaller frames but you can find bigger tires with them.

The suspension of these bikes is most comfortable for the women and the frame adjustment on which the rider quite easily knows the difference from the other brands of women mountain bikes. 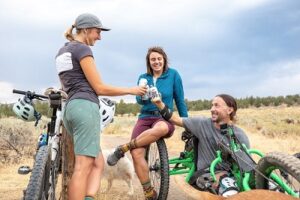 The large, medium and small sizes are available depending on the height and body type of the rider.it is very famous among the pro women racers because it does not cause any slowness or any kind of trouble while climbing and it is much faster in speed while descending on a single trail.

Liv Intrigue bikes are full suspension mountain bikes specially designed for women, its frame and geometry are designed in such a way that their suspensions will absorb all the bumps of the trail the aero shape of the bike shows that it is too faster and the wind resistance is lower. Liv intrigue has RockShox air suspension with 150 mm in the front and 140 mm in the back.

The dropper post of Liv Intrigue is much comfortable manufactured for women that’s why women riders love it the most. Another pretty thing about such bikes is that their frames are manufactured in such a way that the color of the frame seems different when you see it from one side and a different color on the side. 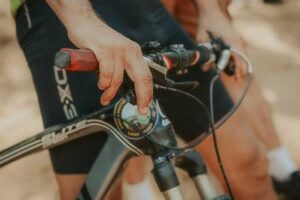 it is lighter in weight than the other bikes, the frame is made of aluminum. it looks bigger in size because it is mostly used for long mileages. the advantage of big tires create good contact with the earth’s surface and provide the best traction, the top front of the tire has much grip. every contact point of this bike like the saddle, handlebar, grips, are narrower specially designed for the women’s ride.

Mostly used for green and blue trails but the bike isn’t so fragile and can take a beating as well, the frame range is actually nice on this bike they offer bigger frames for 5.5-6 feet height persons as well.

it has a tapered headtube. it is available in black, silver, orange, white colors in the market.

The headtube of this bike is 67.5 degrees and the handle bards are available in the narrower and wider length it depends on the wrist and forearm of the elbows and the height of the dropper post limit is 150mm and the front fork is 130mm and has a good compression you can adjust the compression of the fork regarding your body weight and the rear fork is also adjusted in the same way as that of the fork of the rhyme brand.

It is a full suspension bike in the price range of 2500 to 3k$.when it comes to discussing the specs of this bike, it offers really great specs for the money.

Specially made for single trials generally equipped with large Maxxis tires with 27.5 wheels of tubeless tires which makes the bike much lighter. it has hydraulic disc brakes of Shimano company. the back cassette has 51 cogs. it has an awesome feature of lowering the saddle when you are descending down trails.

it is a full-suspension bike so it has 130mm of front and rear suspension air forks, you can set the pressure of your own desire depending on your bodyweight full suspension bikes are much comfortable while going uphills and descending. This bike contains each and every feature of the modern expensive mountain bikes.

it is a full-suspension mountain bike with 120mm of front suspension and 130mm of rear suspension. it is famous for its wheels and the rolling tires much lighter while riding in the trails and the frame geometry is a little bit different as compared to the LIV embolden bike. 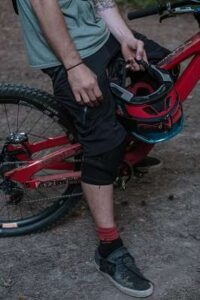 it is small in size made perfectly for women, rocky mountain bike brand is also famous for the kids as well because they offer smaller frames and are best on single trails.

The bike is made for a beating if you are looking for that, downhill enduro bike with very good specs.

racings the reason is that it does not contain any modern feature of the expensive mountain bikes, it has a single front crank ring chain but it is also firm and rigid and owns many years of lifespan.

it has 180mm of front and back rotator brakes of Shimano company.

Juliana is another women-specific brand well known for their bikes they make lighter bikes with lower standover height and lower reach the brand makes bikes for lighter-weight riders rather than typical all-rounder bikes, relatively famous among women mountain bikers

typically perfect matching size and type of women with 27.5 wheel size. it is a faster speed bike because the cassette contains 52 cogs used for any straight type of climbing.

Juliana Furtado has a very fantastic front suspension which is made for absorbing the bumps and the bigger hits, the bike would face on the trails.it has a short stem with a grippy flat handlebar. compression of this bike works smoothly through the corner trails and if you are bending on the bike through the corner the suspension pushes you to the other side and it saves you from many any type of risks.

Juliana company is famous for the best-controlling feature in its bikes.

it belongs to the Santa Cruz brand and it is a full-suspension mountain bike Bronson V2 is used for downhill and uphill trails but V3 is often less used for descending rides.it is designed for the high speed straight forwarded trails feels much better while riding a high speed .s o Bronson bike has the speed feature.

it also has the shock locking feature which helps when you are pedaling uphill for more than an hour or two you can easily lock the shock for a better feel.

The angle of the seat is much steep which does not tire you when pedaling you can easily sit on the saddle due to this feature it provides much traction in the back wheel. the saddle will give you a pleasant comfortable position and you would not feel uncomfortable finding a good position on the saddle.

These 160mm front and rear shocks provide a pillowy suspension and the front crank ring is 3 by 8/24 speed. it is very helpful for climbing and descending trails.it has 160mm of rotor.

Norco storm contains Shimano company derailleur. you can choose Norco storm of your own size these are available in medium, large and small sizes. I am 5.3, medium side Norco storm is perfect for this height. 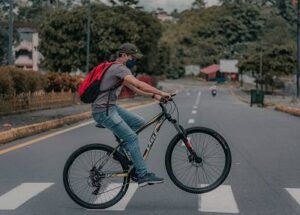 Norco storm is available in 27.5 and 29er wheel sizes depending on your height range .its the best competitor of the trek marlin mountain bike in the racing festivals. it has an 11-speed cassette with 51 cogs.

it is one of the best mountain bikes which leaves behind the hybrid enduro and the other trail bikes. the dropper post is 130mm with hydraulic disk brakes. also, it is budget-friendly it ranges from 1000 to 1500$ it does not matter about its price because it performs well on the flowy and faster trails.

this is a full-suspension mountain bike, it has three types:

the difference is in their material, transition patrol has an alloy frame and transition scout has a carbon frame. almost all types are excellent for racing the other thing is the budget range which varies differently. you can choose any of them it depends on the customer money and the riding trails through which you have been riding for years.

The transition spire has 170mm of back & front shocks with large 29 wheels and 460mm reach.

Transition scout is heavier in weight, so these are mostly used for the descending trails. switching from hardtail to transition scout full-suspension improves the rider skills after riding on the trails.

transition scout is much stable and does not lose control in the downhill race. the tires are grippy which provides much traction with the ground. it has the best feature of aggressiveness of moving right and left on the corner trails.